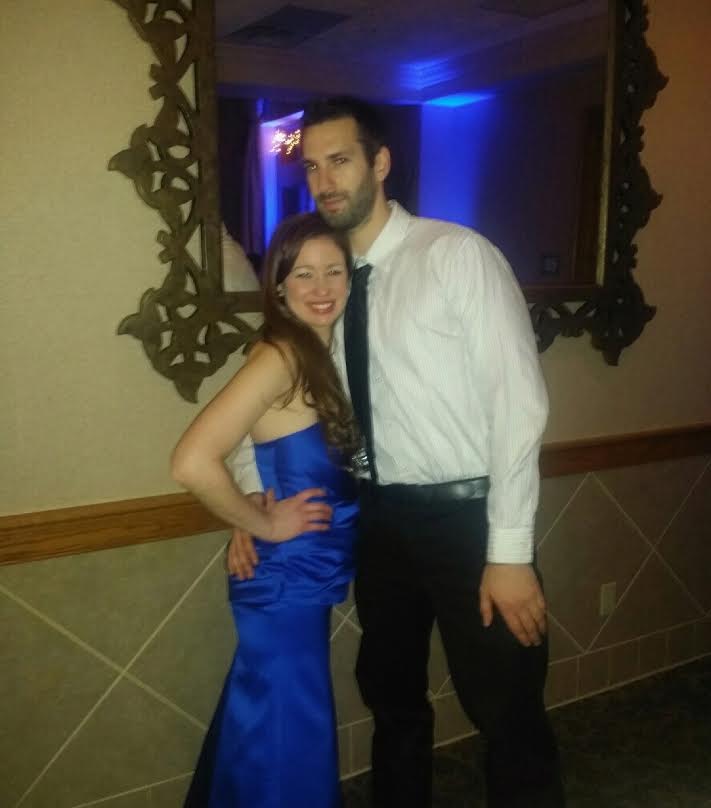 Editors Note:  You’re single, and you want to find someone special.  If it seems like all the “good ones” are already taken, online dating is a way to open up a vast new bunch of potential love matches. But while online dating is easy and it can be a lot of fun, it can also be frustrating.  Doubtless you’ve heard horror stories, but there are also plenty of stories with happy endings. That’s why when Hope Kumor approached Leather and Lace Advice and asked if we would publish her personal success story of online dating, we agreed to do it.  Note that this is Hope’s own story. We and we are not specifically endorsing the online dating sites she mentions.   (alison and tony aka. “Leather and Lace”)

I vowed never to create an online dating account. I would never give in and upload photos and my information on a website due to fear of being stalked. Guys have creeped on me before, sometimes following me in the store or staring at me in rather unsettling ways. I felt absolutely desperate and needy even thinking of it. In fact,  My mom always told me I’d “meet someone who I least expected it” so I refused to try this online thing.  Also I didn’t want to pay for a service because no matter what, I didn’t feel that desperate.

Things changed after I broke up with my boyfriend and I’d graduated from college. My bestie and I were newly single and we went out a lot.  We were always hitting the town and having fun. She was the one who convinced me to make a Plenty of Fish account with her (that’s an online dating site).  Instead of fighting it, I went along for the ride.  I have to admit — not only did I feel desperate, I felt absolutely disgusting each time I logged onto the site because I was so against it, but I did want to try something new.

I received a lot of messages in the first few minutes. I was amazed. Some were creepy and others were sort of cute. I spoke to several guys at the same time. I was always skeptical of these men,  and didn’t give my number out so easily. Each time I’d have a decent conversation with a guy I liked, he’d disappear out of the blue. I soon realized that both men and women often do that on these sites,  because they find someone else or get bored.

I wasn’t having a good time.  Part of this was that I was missing my ex-boyfriend, and the other part was my disappointment in the career department. I had so much on my mind  that  having a boyfriend was (honestly) the last thing on my list. But, still, I kept on wanting someone to be there.  I missed that.

The summer months went by and in late August, I deleted my Plenty of Fish account because I was frustrated with men (in general). But then again in September, without anyone else knowing it, I created an account at another dating site called OKcupid.   I would sign on late at night and would speak with guys as if it was a secret. I developed this unsettling feeling in my stomach that wouldn’t go away. I didn’t want to rely on a guy. I was speaking with a guy in the army for a while and had feelings for him. I gave him my number but nothing really developed with him.

On October 6th I finally met Brett, someone who was interested in two things I’m quite passionate about—writing and health & fitness. The first thing he asked me was how I got into health & fitness. I’m into working out and so is he . We immediately had that in common.  We continued sending notes back and forth. The difference was we’d have very deep conversations — death, life, our inner thoughts and feelings. We’d speak about anything and everything before we even met. I was scared, but liked this guy!

We finally met on October 16th and to my surprise, the date turned out awesome because he was so sexy and had big muscles (pictures never do people justice).  But more importantly, there were no awkward pauses or shifty eyes.  We went to work out (really important to both of us) and afterwards we went to grab a bite to eat. All seemed to be going well.  But the second date wasn’t that great. We were supposed to go apple picking but that didn’t work out well and he didn’t appear as confident.  I remember I really didn’t enjoy myself and I remember missing my ex-boyfriend.

I kind of decided to place him in the friend zone, but then my bestie found a guy around the same time and we planned a double date. It was a bit awkward since I’d just told the guy I wished to be friends, but my bestie told me not to give up on him yet.  We planned to go to a  haunted house. He picked me up and we  flirted on the way over to my friend’s house. That was confusing. Throughout the night, those feelings for him came back. While we stood in the haunted house, I merely looked at him. This time, I really saw him and wanted him. He was shocked when I asked to hold his hand. I was feeling so many different emotions. I liked him. I didn’t. I needed him. I didn’t want him.

Later that night, he asked me point blank, “so, what’s going on here?” I told him that I wanted to take things really, really slow, I mean, like really, really slow and he agreed. This was November and by Valentine’s Day he told me he loved me and I said it back. I was always so afraid of love. I was always scared to fall in love. I never wanted to lean on someone for too long due to fear getting hurt.

In a million years, I never imagined finding someone on the internet.  I admit that it can be full of creepers, stalkers, guys who just want sex and desperate people. I didn’t want to be part of that group, but now, I guess I am. I don’t tell too many people I met Brett online because I’m scared they will judge me, but ready or not, here I come!

I have a successful online relationship and I’m not afraid to admit it! So, let the judging begin!   ” Tell your readers that if they are going to correspond with someone online, they need to write enough for the other person to be able to respond with questions (so you can get to know one another). You simply cannot state “whatever” or “nothing.”   Also, don’t feel embarrassed about going online to find love. Before I did it, I thought people who dated online must be desperate, but now, since meeting Brett, my boyfriend, I feel like everyone is doing it and it’s okay! I even got my brother to make an account I didn’t think in a million years that I’d meet THE PERFECT GUY on a stupid website. You never know who you’re going to meet on these sites.!”

Online dating can be fun, and it’s easy but it isn’t a substitute for other types of meeting and mingling.  Don’t make it the only outlet to find someone special.  That is our #1 tip.  Get out in the real world and meet people in all the ways that you can, as well as supplementing with online dating.

When selecting a service keep these things in mind:

Some services may not have enough of the types of people or the demographics that you need to make a match. If you are a senior single, for example, you might be better off joining a smaller service that caters more closely to your age requirements than a large site with more singles, but less that would be interested in dating you.  Make sure the service is reputable and has a privacy policy that is acceptable to you. Large numbers of members sound impressive, but many may actually be off the market (but still  listed as active) and therefore are useless to you. Consider too, that if most of the members are not near you,  this won’t help you get a date in your area.

Be aware that most free sites really aren’t  “free.”  You must provide personal information and may be required to download (add electronically to your computer) special software (programs) to get the chat service working on your computer. Check the site’s privacy policy and don’t be surprised if you get spam (junk mail) from “adult” oriented advertisers.

When posting your online profile, keep these things in mind:

Give serious thought to what you say, as this is the only way people can judge whether you could be a potential match.  Certain criteria such as age, height, body type, religion, marital and parenthood status, smoking and drinking habits will be used to help you sort your best matches. Some sites have psychological and even physical attraction “tests” that you can take to help you find appropriate matches, but they are always pretty basic.

Don’t divulge anything personal such as where you live, but DO say something about yourself, such as what your interests are or what kind of person you are seeking.  Everyone likes “moonlight walks” so be more specific, such as your skill as a baker, or that you like ballroom dancing.

Carefully consider what might be a real liability, such as a physical disability. If you mention these outright you will limit your responses, but if there is something very important about you that isn’t going to change, you want to attract only people who will want you as much as you want them .It is how you describe something that makes the difference in perception.  Read: Should I disclose My Disability On A Dating Site?  If you are extremely tall, for example, you might describe that as: “you might need a stepladder to reach me!” instead of just: “I’m very tall.”  Conversely, if there is something you really must have or don’t want, make it clear. If you say “only Christian men” or “no one under 5’8” or “no children,” it excludes those who don’t fit your requirements and lets them know not to waste their time contacting you.  Just expect your responses to be more limited, but focused. Should you outright lie about your age or anything else?  Read: Why Do Older Men Want To Do Younger Women?

Some say a photo isn’t necessary, but not posting a photo makes a statement that can work for or against you, and generally it makes people think you are hiding something.  Post at least one recent photo, full body is best. If you post another photo make it one that shows your personality or your passion, with something you love (eg. your pet, your hobby, doing something you enjoy).  A smile is a must. And don’t do what one man did when he posted a photo of another man –an elderly actor  (and not an attractive man at that) with the caption: “Yes, that’s him, not me, but all my friends say I look like him .” Common but unacceptable are photos in which there is a disembodied arm or hand not quite cut out of the photo (generally a wedding photo), or any photo with flash glare or that is so fuzzy you can’t make out someone’s features.