Our Religious Differences Are Pulling Us Apart, Can Love Keep Us Together?

My girlfriend and I have been seeing each other for several years.  However, She is Sikh and I am Hindu and while we were just friends this wasn’t that much of an issue, but as I got more serious with her, she began telling me that she is unsure of our religious and cultural differences.  She says she loves me but she isn’t in love with me, but I do love her, and I don’t believe her when she says she doesn’t love me.  She shows me she does, in all the ways that count.   Now, she says she only wants to be my friend, not my marriage partner. But she also said that she wants to stay close to me while she is still in her last year of law school because it is so difficult and she needs the support.  She also said he has to figure out what she wants to do so she doesn’t want to break things off completely.  I am very hurt and frankly, I think she is hurting too, but I don’t really know what to do except respect her wishes. I feel devastated, and lonely. I miss her!  I guess I could stick around and continue to be her friend and support her as she is requesting, but it is so hard on me.  And I can only hope that she realizes that our religious and cultural differences can be resolved and societal pressures can be dealt with.  Can’t love keep us together and conquer all? 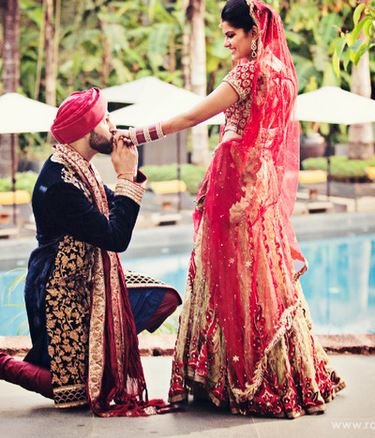 I guess our parents think we’ll make a good couple

Alison Take:  You have brought up several different issues here.  The first that I see is really more important than anything else, and that is your girlfriend says is not in love with you.  It wouldn’t matter if you were both Sikh, or both Hindu, if she wasn’t in love with you and didn’t want to be your marriage partner, the relationship wouldn’t be the right one no matter how perfect you think it is.  Both partners have to feel the same way, or at least similarly.  Three of our former Q&A features on leatherandlaceadvice.com might give you some additional perspectives on this:    Read:  How do I know If I Have Found A True Love?;  Read: She Says She Loves Me But She’s Not In Love With Me;  Read: I’m So Addicted to Her and I Can’t Break Free).

That said, it is possible that your girlfriend is now under a lot of stress, and realizes that having a boyfriend is making it more difficult for her to focus on her studies. She, like you, may not want to be hurtful, but knows that the relationship you have is one of warmth and comfort, but it isn’t going to be one of long term commitment.  It wouldn’t be kind or fair of her to keep you hanging on hoping for something more when she doesn’t intend to follow through with that.  So she is doing the right thing to tell you the truth and set you free to find a woman who will love you the way you deserve to be loved.

It could also be that she has been pressured by her family to find someone who is Sikh.  Yes, love should conquer all, but as a dating & relationship expert who used to write a love advice column for Chai Time  (an Indian dating site), I am well aware that not some families are still very traditional. Your girlfriend will be a working woman with a career when she graduates from law school, but she is probably still her father’s dutiful daughter,  loyal to her family above all. She will follow their wishes for her to marry a man who is either chosen by the family, or at least shares their  religion. It may seem unfair that love can’t keep two people together, but sometimes, it just doesn’t.

Any breakup is difficult, especially when you really love someone.  I can’t tell you that being without her as a girlfriend will be easy.  It takes time to get over the pain of it.  But you will survive it, and the good news is that you now know that you can and must find the right woman for you.  This woman, no matter how special, is apparently not the right one.  If you are fortunate, you will also be able to keep this special woman in your life as she requested, as a friend.  If it is too painful for you to do that at this point, do the traditional thing and surround yourself with friends, family and lots of activities.  Keeping busy isn’t a substitute for a beautiful love life, but it helps. In time, you will move forward again.

Tony’s Take:  To Alison’s excellent advice, I add the following to help our readers understand:

For those of our readers who do not understand how huge a cultural difference this is, a brief word of explanation is in order.  The cultural difference is much greater between these two religions than, for example, Christianty nd Judaism. The Sikh people are a proud but insular people because they have been strongly identified by their religion, which contains elements of several western religions as well as a prophetic tradition of its own. Since they so identify with the religion and the culture surrounding it, and the long tradition of arranged marriages, there is huge pressure on any member to marry within the religion. On the other hand, the Hindu religion is a more traditional Eastern religion. Regardless, both religions are not particularly accepting of outsiders and have  deep seated beliefs which are hard to reconcile, particularly when it comes to modern marriages in other words, those not arranges by the parents.

Since it is apparent that your girlfriend is conflicted about this tradition, probably because of the influence of her parents and family, she is looking on  having a relationship with you meaning that she has to give up her friends and her family in order to be with you, a scary proposition for any woman. There is little you can do, since she would have to break with tradition to be with you, and she is not yet ready to do that.