Although we normally wouldn’t review a  movie in an advice related website, the relationships and intimacy issues which the book 50 Shades of Grey brought up have been examined by us on several occasions. Now that the movie has come out to be received by record crowds, we at leatherandlaceadvice felt it necessary to compare and contrast the movie to the book , to what we’ve said previously, and to the reality of the issues the book and the movie have brought up.

As we discussed in other posts, your average sexually curious couple does not have several billion dollars, a jet, a helicopter and an apartment that encompasses two entire floors of a building,  plus a full staff to take care of every need. This is all window dressing. The author originally intended the book to be about psychological control, Christian wanting control over every aspect of Ana’s life. The author was channeling 9 1/2 Weeks and Looking for Mr. Goodbar (books from 20 and 30 years ago that explored this type of psychological control). In fact, the ending of the movie, which was disappointing to many, was the escape from such control. In this case, unlike the book, without a chance for redemption in the relationship.

Both the book and the movie as a study of BDSM and of its lifestyle fail (for the most part)  to understand the relationship between a Dominant and a Submissive. Ultimately, as you can see a little bit in Ana, the submissive actually owns the power in the relationship because if she is unwilling to go along (to “play”), then there is no Dominant/Submissive relationship. A Dominant cares deeply about their submissive because it is only through them and their feelings that the Dominant feels alive and fulfilled. The Dominant needs to feel appreciated and cherished for the time and effort and attention they pay to their submissive. In short, there is an intimate relationship between a Dominant and a Submissive. The book and the movie’s failings is that this intimacy never comes through. Instead, it is replaced by eroticism and psychological coercesion.

Other than the savage beating with a belt which Ana hopes will bring Christian closure (but only poisons the relationship), the other erotic scenes in the movie are very close to reality in a Dominant and Submissive or Bondage and Discipline lifestyle. The first scene with the riding crop (quirt) is very much how a Dominant will tease a Submissive, as is using ice cubes as Christian did in the second red room scene. Both are designed to bring the Submissive (in this case, Ana)  to higher levels of pleasure and to make her understand that she is the sole object of all of his concentration, inventiveness, affection, and sexual energy.

Tony Sabatini aka. “Leather” of LeatherandLaceadvice.com

Alison’s Take (HER View):  I have a bias about seeing movies after I’ve read the book (and I did read all three volumes in the 50 Shades of Grey Trilogy). Once I’ve firmly set in my mind how the characters in a book should be, I don’t ever feel comfortable with someone else’s vision supplanting mine.

I wondered why women (a lot of them middle aged, married with children) were so incredibly enthusiastic about the books, and waited on line in the cold to get in to see the movie. But halfway through the movie, I found a clue.  Christian is a hard case who is so rigid in his ways, no woman has broken through (his mother has never seen him with a girlfriend, for example, and he doesn’t do “romance”).  But in the movie, Christian says to Ana: “I have never spent the night in the same bed with a woman before you” and Christian mentions a few other “firsts” with Ana, and then he says: “Ana, you are changing me.”  Even though the soundtrack was loud, you could hear the collective sigh in the audience.  While the sensible thing to understand is that you should never try to change someone (especially a man), women believe in their hearts that they are so special that they can win a man’s heart and make him — no matter how flawed — change his ways to become the man of their dreams. Women believe that they alone will be about to touch one man so deeply ( as Ana does) that that they will have that power to change him. Perhaps that’s the real allure of the books and the movie. It’s not the sex. It’s not the luxury. It’s the fact that a mousy, innocent girl somehow can make a powerful billionnaire with serious flaws, change for her.  She alone, can make him do things he never imagined he could ever do because of her love.

Continuing on this thought:    Ana might moderate some of Christian’s behavior, but in return Christian is changing Ana, too. As she continues to stay with Christian,  Ana gets used to having a driver, fancy clothes, good wine, and she even begins to enjoy being a submissive. While she never signs the required contract and she doesn’t allow Christian to go past her hard limits (and she never actually agrees to be his submissive), she does allow him Dominant behavior toward her so she does become his Submissive. In effect, haven’t they both changed each other?

There’s another moment in the movie where Ana begs Christian to be “normal” and do “normal” things. “Why can’t you just be normal? she begs. “This is just the way I am, I am just 50 shades of fucked up” Christian replies in obvious frustration.  While the movie shows Christian’s scars on his body, they don’t go into the reasons. His scars run much deeper than the physical. This is where the movie really fails, for it’s here that Christian’s need to control and why he really feels compelled to bring women to his “red room of pain” begins. Christian is a man who had a horrible start in life with a drug-addicted prostitute mother who abandoned him. He has so much rage that every woman he meets becomes in effect (his mother) and the object of his anger instead of the object of his love. That’s why he can’t really love anyone and let them into his life. 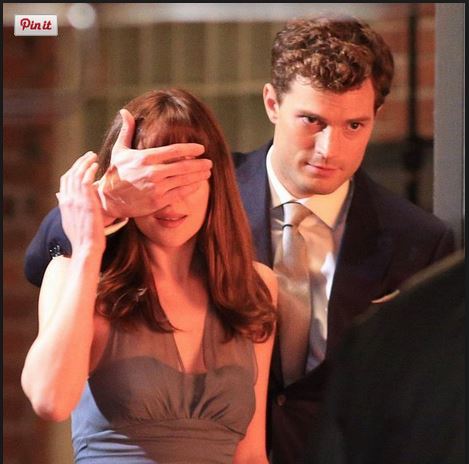 One last point that really bothered me both in the trilogy and in the movie is the illusion of the ideal life as a “trophy.”  In the books, Ana is given every ounce of luxury. In the movie, you see her in pretty clothes, but it is unclear that Christian had “rules” for what she could (and could not) wear. And while movie-goers see Ana getting a new car for graduation, Christian takes the liberty of selling her old car that she loved, without even asking her (in the book he decides her car is too old to be safe so he won’t let her use it). When Ana needs some time to think about whether or not she can continue to be with Christian and goes to see her mother, he refuses to give her that space, “surprising” her by showing up uninvited and without warming (he does that often in the early stages of the relationship).  Under the guise of giving her everything, Ana loses herself to the ultimate control freak (but women in the audience are thinking: Oh, but she’s the center of his world…how utterly romantic).  What Christian does (and what the audience fails to see) is that Christian is performing the ultimate invasion of Ana’s privacy and takeover of her personality. As the books progress, Ana has less and less control over any aspect of her life until she completely loses herself, letting Christian make all her decisions and reverse any that she might make on her own if he doesn’t like them.

After the movie ended, four women in front of Tony and I who clearly had never read the books started talking about how disappointed and sad they were, because  the movie didn’t have their wished-for happy ending. Tony told them that if they read all of the books they would find the happy ending because Christian and Ana do get together. Immediately, they cheered, hugging each other as if they’d won the lottery. Everyone loves a love story where girl gets boy, get loses boy, girl despairs, but they get back together and live happily ever after. That’s the shallow part of the book and the movie, but that part isn’t even shown in the movie.

Alison Blackman aka. “Lace” of leatherandlaceadvice.com

what do you think of our “takes” we would love your comments!