Is the Movie 50 Shades Darker Shocking? Should You See It? Movie Advice From LeatherandLaceAdvice

We were invited to the press preview for the movie, 50 Shades Darker, the sequel to the hit, 50 Shades of Gray.

By the time you read this review, the movie will be in your local theaters.

Should you see it?

Was it shocking?  True to the Book?  A good movie?

We are relationship experts, not movie critics, but we have a few thoughts about the movie, 50 Shades Darker, and about movie audiences (in general)

Seeing one of the 50 shades movies is akin to the opera. If you don’t’ know the story, you’re not going to follow the plot and everything is done with great exaggeration.

In the movie, 50 Shades Darker at least, you’re thankfully spared from the key actors breaking out into spontaneous song/

And the good news is there actually is a plot to this movie it is actually watchable for more than it’s steamy loves scenes. We must compliment the director

We must compliment the director and director of photography, because the love scenes are very artfully done. we note for the record that the film saved a fortune on shirts for the leading man. However, they more than spent that money on very pretty very expensive lingerie. No child of an employee of La Perla or Natori will go hungry this week.

However, they more than spent that money on very pretty very expensive lingerie for the leading lady. No child of an employee of La Perla or Natori will go hungry this week! 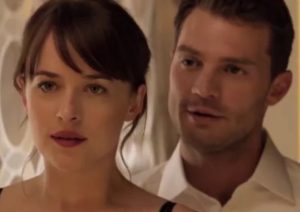 Now don’t get me wrong I liked this film. I am unusual in that I like Rom coms (romantic comedies), also.

But as someone who understands at least the basics of dominance and submission (D/S) and S & M relationships, having been around them in my youth in Greenwich Village, the writer of 50 Shades of Gray acknowledged that what little she knew about the scene she learned from a friend.

She was, at least, honest about it.

The script writer, on the other hand, is just totally clueless about D&S and S&M relationships which will sadly lead to misconceptions and possibly getting those who might like experiment with D&S and S&M into difficult situations.

The part of the whole ‘scene” they got right was the obsession of Christian Gray and the lust that it generates, and Ana Steele’s corresponding awakening to passion which she did not know existed in herself that addicted her as powerfully as any drug The point of a D&S

The point of a D&S relationship is a total commitment of the dom to the sub and of the sub to the dom. In that part at least, came cross on the screen. and just for that, this movie is worth seeing.

In that part at least, came cross on the screen. and just for that, this movie is worth seeing.

You might take a guy with you to see 50 Shades Darker, but let’s face it: both the book series and the films really appeal most to women.

Most women would find  Christian Gray exercising without his shirt, and of course, the clothes, the condo, the utter devotion of Christian to his Ana, appealing. I’m no different.

I also liked the movie 50 Shades Darker. It kept my attention for all 118 minutes, other than being distracted by inappropriate, sporadic outbursts of hysterical laughter from some of the media in the back of the theater (more on this at the end of my review) 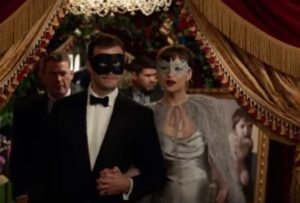 Take a gorgeous (but flawed) hunk (if he’s a billionaire even better) and find a woman who can “tame” him.

Then add to this all the trappings that make for a woman’s fantasies, from gorgeous gowns and jewels (and in this movie a lot of, lingerie and shoes) to fancy cars, luxury galas, gorgeous yachts, and a fabulous penthouse to live in, and you’ve got most of the women in the audience to pay attention. . When the man in question is besotted only with one woman, and she’s nothing special, just a sweet, ordinary and somewhat naive young girl, it’s a slam dunk that the response will be audible sighs.

When the man in question is besotted only with one woman, and she’s nothing special, just a sweet, ordinary and somewhat naive young girl, it’s a slam dunk that the response will be audible sighs.

It bothers me less than Tony that the D/s and S&M described has little resemblance to reality, because “50 Shades” is romantic fantasy.

What the film is really about is how an ordinary girl gets to meet (and change) powerful man who can do anything he wants, except fix himself.

She alone tames his demons and wins his undying devotion.

Sigh!  And we can’t even get most men to take out the trash!

Our General Advice For Movie Goers:

Whether you go to see 50 Shades Darker, or some other movie, we’d like to remind you that half of the fun of the movie is being able to enjoy it in a crowd. When one (or many) people behave badly, it ruins the experience for everyone.

When one (or many) people behave badly, it ruins the experience for everyone.

At our press preview, it was clear that some of the media didn’t really want to be there, or felt uncomfortable with the subject matter.

We understand that when people tend to laugh when they feel uncomfortable. but when you are in a crowded theater, but if the subject matter doesn’t appeal to you or the film bores you, it’s better to leave than to destroy the experience for everyone else.

Several women were loudly complaining that they hated this kind of movie and laughed hysterically through the first one, before the movie began. The were loud enough to make sure everyone heard them.

Then they went to sit in the back of the theater and spent the entire film laughing when the scenes were serious, not funny.

We were not only ashamed that members of the media would behave like this, but no one pulled them out, so we all had to endure this childish and selfish behavior.

When you go to see a movie, whether it is 50 Shades Darker, or nay movie, consider that you’re not the only one in the theater.  And, of course, taking out your cell phone (which lights up the theater) for texting, selfies, or worse, phone calls is so obnoxious, you should be banned fo

Don’t laugh, carry on a running commentary, or text on your cell phone (which lights up the theater) , take selfies or vidoeos of the screen, or worse make phone calls (We have seen all of this).you should be banned fo

If you do, consider yourself banned for life from public spaces!