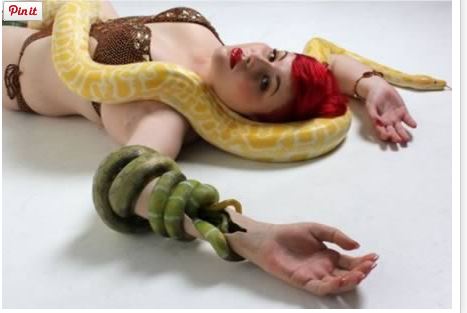 The Alternative Limb Project gives people who have prosthetic limbs the chance to make a fashion statement.  Paralympian and swimming champion Jo-Jo Cranfield, for example,  wears an arm with a realistic-looking snake coiled around it.

I was born without upper limbs (no arms or hands), but I wear braces that look so real a lot of people think they are real, until and unless I tell them and show them that they aren’t. Mostly, this hasn’t been much of an issue, but when it comes to dating, it can get awkward.  My issue now is that I met someone I really like, but I didn’t tell him about my disability, and now I’m avoiding him because I didn’t tell him.  I went to a bar that I frequent, and at the coat check I literally bumped into a really cute guy. I had already put on my coat, hat and gloves, so he didn’t see my body at all. We just started talking, and after a short while his friends came by and they were all getting ready to leave.  To my horror, this cute guy stuck out his hand to shake mine. I don’t know why I didn’t do something else, but I freaked and simply ran away.  I felt like an idiot afterwards as I could have handled this so differently.  What’s making this so bad is that I keep seeing him in the bar, and I’d like to talk to him but I keep avoiding him because I really don’t know what to do or say.  I’m sure he thinks I’m rude, or crazy, or both.  But it’s not true. How would I be able to tell him the truth and hopefully get things going with him?

Alison’s Take:  Tony and I have answered this question in a couple of different ways on Leatherandlaceadvice.com already (read:  Should I Disclose My Disability on a Dating Site  and I’m Disabled, Not Dead, Help Me To Find Love).  In both of these popular Q&As we have received both negative and positive comments from men and women who are disabled, and those who are in relationships with disabled men and women.  Tony and I have differing views on the subject as well.

Not everyone is going to react positively and you already know that, so I’m not going to sugar-coat that fact, but the main thing you have to ask yourself is: “Why did I freak and run?’   You say that you are fine with you as you are, but no one would fault you if you were feeling that you might risk rejection from a man you are attracted to.  Did you run because you were afraid of his reaction?

As a writer, I think how you describe something is as important as what that thing is.  It would have been unwise in this particular situation to go into a long diatribe about your disability, but you could have had a business card at the ready, smiled and said “call me” instead of returning his handshake. Or you could have leaned in for an air kiss (sexy, but not over the top) which tells him you are interested and refused the handshake as too “cold.”  You could have also just stepped back a few paces, smiled, and said: “let’s exchange phone numbers (or emails, or whatever)” and  ndrefused the handshake too. This guy might have thought any of these a bit odd, but it would have been far better than bolting and you would have the chance to explain at a more appropriate time and place.

It takes courage to be in your position, so be proud of who you are and understand that avoiding this guy will not make you feel any better (if it wasn’t bothering you, your letter wouldn’t have been sent to Leather and Lace Advice).  The only way you will get able to put this past you is to talk to him and tell him the truth.  The next time you see him at the bar, ask if you might speak to him privately, away from his friends. Then tell him what happened.  If he recoils in horror, well, at least you tried. If he doesn’t, score one for you.

Life is not fair, and if you have something–anything–in your background that you personally feel could be a problem for someone you need to be aware of it and own it.  Dating is not a politically correct activity. It is a  process of elimination, not of selection. You eliminate those you don’t’ see a future with (for whatever reasons) and they eliminate you (for whatever reasons) until you find someone who wants what you have to offer, and you feel the same way about them.  Any man who is repelled by your “secret” isn’t going to be the man for you. He ends up in your  “reject” pile,  no matter how cute you think he is and how much you want him to accept you.  It might be terribly unfair for human beings to judge each other that way, but we can, and we do.  You are going to face rejection, and you are going to reject people. People without disabilities face the same type of rejection too, although maybe their dating pool is wider than yours. So go out there and find your voice and go after what you want, the odds are still in your favor!

Tony’s Take:  Quodos for your courage to being out and being social. I realize you could be totally depressed and admire you for your ability to smile in the face of adversity.

We are all shy in the face of a potential relationship which we want, and therefore you cannot hold it against yourself for attempting to avoid a possibly embarrassing moment. People are attracted by happiness and confidence. If you show happiness and confidence no matter how they respond to you as a potential date they will be social and respectful about it. The issue with running away is that you showed embarrassment and by doing you made yourself and all those around you, uncomfortable. That’s one of the reasons you are feeling bad about the issue. If you put people at ease they will accept you, even if they don’t want to date you and for the right guy, it will inspire him.

I would hope that you would be forward enough to go and talk to this guy and see if there is anything really there being a bit coy about opening up about yourself at first.If you think he is of substance then you can casually introduce the subject of your issues in a public place, where you can be light and witty about it. If he is still interested, then it is time for the coffee date, then the dinner date, then something more meaningful. Just be bright and cheerful and open about your issues and what they mean as far as your life and activities. If he rejects you, Alison’s advice is well taken. If he doesn’t, as she says, score one for you!