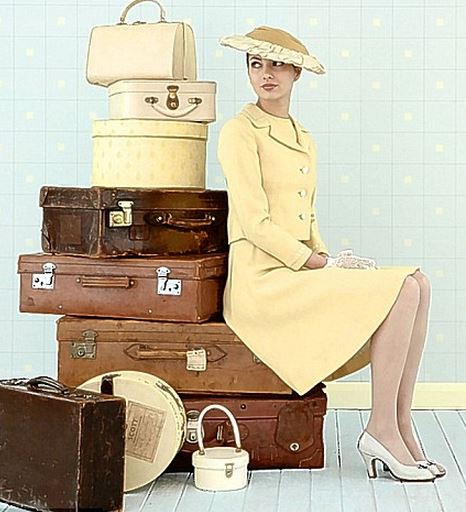 He offered me an all expenses paid trip to Paris but I don’t know him well …Should I Say Yes?

I met David a few months ago and it looks like things are moving forward in a positive way, but I was caught off guard when, last week, David said he had to go to Paris on business, and asked me to go with him. Normally, I am cautious. I really like to take things slowly. We haven’t even gone away for a weekend together yet! I was surprised and I wanted to say yes, especially since I’ve always wanted to see Paris, and David said he would pay for everything. But the more practical side of me is worried that it was way too soon to go somewhere far from home with someone I just don’t know that well. David says it is a quick way to see if we are compatible as a couple, but although I can see his point, I’m not sure I’m ready to put myself out there in such an intimate way. If I don’t go he may think I’m not interested in him or don’t trust him, but I’m kind of afraid to say YES. What do you two think?

Tony’s Take:  Having done exactly what David did, my personal opinion is that it is a great idea and you should go for it.

The good news is that the destination is Paris and you’re only staying in one City, which makes it relatively safe. I would, however, make sure that your plane ticket is in your possession and that you have copies of both his passport and your passport leaving his passport copy at home with a friend.

If it feels right, it is never too early. Going away to Paris if he is on business is the equivalent of going away to the Mountains for a weekend. It is just farther away and the food is better (not to mention the wine)!

Men who work for international companies end up traveling a lot and the smart ones take extra time to enjoy the cities they’re in. Your new boyfriend wants companionship. and he understands your financial situation and is willing to pay for the pleasure of your company on his adventures.

Obviously, if you have not yet been intimate I would not suggest this because it would be far too much stress whereas if you are already intimate with David then having him as a roommate should not be that much of a stress, especially since you will be out of the room most of the time.

My advice is to go and enjoy.

Alison’s Take:  I am so not for this! Your motivation is a free trip and that isn’t about love, it’s just being greedy.   You didn’t say that you wanted to get to know David better,  you said you wanted an all expenses paid trip to Paris even though that is never in your comfort zone and you like to take things slowly.

A free trip to Paris sounds like something you just can’t pass up, but before you start packing those bags, think twice.  I disagree with Tony that the destination appears safe so it doesn’t matter that it is overseas. David may just want some companionship but he might have other plans. People are not always what they seem (even the Boston Strangler managed to seem “nice” to his victims for a while, until he killed them all).  I have heard horror stories of women who went away with men they thought they knew, and found their money and passports missing, and became virtual captives, or at the very least had to struggle through with someone they quickly realized they were incompatible with.  And even if David turns out to be a good travel companion, given your misgivings  at the very least, it will be awkward and you’ll be on edge the entire time.

I also feel that the beginning of a new, intimate relationship should have some mystery to it. Once David has heard your loud snoring, or has seen you without your makeup in the morning, or you have seen aspects of his behavior that surprise but don’t delight you, a lot of the joy of this is gone. Why rush it?  If things don’t turn out the way you want, your budding relationship is over.

Consider too that this is not vacation for David, it’s a business trip.  Assume that he is there to work and will be busy. You will not be a part of this, so be clear on how much time you will be spending together or prepare to be disappointed. My personal experience with this was a first vacation with a man I thought I knew moderately well, but while I imagined we’d focus on each other, or spend romantic evenings on the beach holdings hands, his idea of relaxation was to tune me out and spend most of the time in the room reading all the local newspapers –he just couldn’t disconnect. By the time the trip was over we weren’t speaking to each other anymore and the relationship was over.

You’ll pay a price for this trip, even if it’s not in dollars. If your relationships survives and David travels a lot there will be other trips when you really do know him better and feel more comfortable taking such a huge “gift” from him.  Surely he will understand that you are right to be uncomfortable with his largess just now. A man who respects you and your feelings will be not be put off if you say “no” this time.  Ask for a raincheck.

Tony responds:  Obviously security is of paramount importance.  However, those people who go away to Paris for business are A. not going to a third world country and B. are easily verifiable,. You can check where he works and his position with the company very easily and leave that information with friends. A modern day Europe you really don’t need a passport and if you want one go to the American Embassy and they’ll issue you a new one.