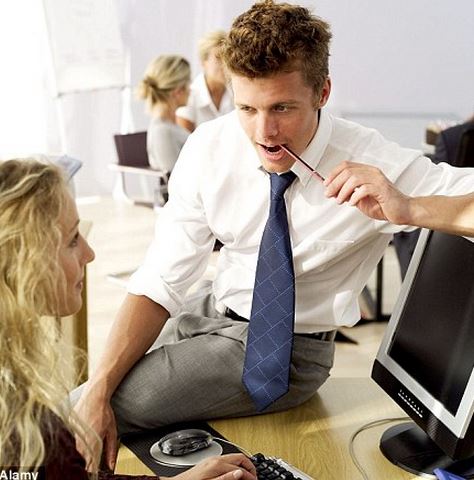 Hey who was that guy you were talking to at the office party last last night? He looked like a real loser.

Whose the Boss? The Manager or the Junior Trainee Hottie?

Hi Leather and Lace,  I am a marketing manager, in my early 30’s.  I have been divorced from an abusive man for about two years. About 8 months ago “Barry” a 24-year old  “hottie” was added as a trainee, the most junior member of our team. He is so charismatic and cute, all the girls have gone wild over him. One night my ex showed up and we had some “words” and Barry must have overheard, because later that night he sent me a text asking about my marriage and what happened. I was surprised, but happy to see his interest. I answered his questions honestly and sent him to my personal blog to learn more about me. In retrospect that probably wasn’t the best idea, but Barry seemed so into me. After that night we talked at night all the time, usually from late in the evening until early in the morning. We talked about everything! Eventually Barry got transferred to another unit so we didn’t see each other at work anymore, but we still talked at night. He said he really missed me. Then finally about three months into our late night chats he said “you are an awesome boss, LUV you” and added some kissy faces. I thought it was cute and I sent some back. It was flirting and it was fun, but I began to realized I wish it was more. Over the months, we had some opportunities to be together, and there was some body language gong on, but even though there was “touching” he never said he loved me and I certainly couldn’t push it. In fact, he encouraged me to date other men and then when I did, he would grill me about every guy and tell me why those guys weren’t good enough for me. He seemed jealous, but he isn’t pursuing me as a girlfriend, either. I’m so confused. Can you help me out?

Tony’s Take:  You answered your own question in the first paragraph.  He is 24. Therefore by definition, he is immature. If he had been at least 27 or 30 my observation would have been different but he is looking at you as a cross between a mother figure and a love interest.  He is not ready to settle down or commit and you being female, and over 30, want a stable relationship and a long term commitment.

His actions are best looked at like a petulant child or a spoiled millennial who, because of his generation, never got the memo on how relationships really work.

The biggest danger here is you are actually committing to him because it will be a co-dependent relationship and he will never grow and mature since he will never suffer the consequences of his socially bad actions. He needs you because he is drawn to your maturity and he is fascinated with you. But fascination isn’t love.

The reason things have not progressed is he knows how to handle booty calls but has no idea how to have a mature relationship which includes love and sex with a woman.

Alison’s Take:   Sunshine,  as the Editor in Chief of leatherandlaceadvice.com  I edited your letter down for privacy and because it was very complicated. But the core of the matter remains.

I have mixed feelings about what Tony says about Barry. I think he is immature, but I also think he knows what he is doing. He is cute and girls flock to him so he knows he is able to play them, and he is also selfish. He doesn’t want to move forward with a relationship with you and make it something real, but he also stops you from creating a relationship with another man,. Given the age difference, but even if there wasn’t one, that’s not thinking about your needs at all. You amuse him but that is as far as it goes. He enjoys seeing you awkward and uncomfortable. It gives him power, and pleasure.

Why do I say this? My first indication was the first time you connected, when Barry asked you all sorts of personal questions and demanded all sorts of personal information , but he really didn’t have the right to do so because he didn’t’ even know you.  He’s not nearly of your age, status or pay grade at work and yet he brazenly wanted to know about your marital issues?  Why you agreed is beyond me,  and frankly, unwise. Barry is the kind of man who gets a charge out of bossing a woman around and he gets his jollies by keeping tabs on you and demanding information, and telling you to date and then denigrating your choices. A wolf can smell a vulnerable sheep and he sniffed you out!

As your letter progressed, I began to think that Barry wasn’t just immature, but deliberately trying to keep you from being happy, knowingly flirting with you to keep you on the hook, but never giving you any indication that this could go anywhere. H is attitude is really” “I don’t want her but it’s such fun to jerk her around that as long as she doesn’t object, I might as well enjoy it” without thinking about the fact that you are in your 30’s, not 20’s like he is, and time is fleeting.

Barry has real balls, however, since he is the most junior member of the team, going after the manager. That really takes some chutzpah. So many people meet at work I can’t object to it, but UNconfuse yourself Sunshine. You are the boss, and he is a subordinate jackass who might jeopardize both your reputations and maybe even your career.  The late night chats might feel sexy and fun, but they’re irresponsible —  you are the adult so you need to end them. Even better, if you like Barry that much, turn the tables and talk to him only if and when you feel like it and not all the time. Be busy FOR REAL and don’t tell him why (this will shift the balance of power back to you).  Keep in mind that Barry likes you but he isn’t attracted to your as a girlfriend, so if you want a stable relationship with a real man, get off the phone and start dating (no details to Barry because he will just say something to stop you and frankly your dates are none of his business). This will finally let him know that you’re wise to his scheme.   Barry gets off on manipulating you. It’s a game.  The last inning is OVER!

Article Name
Whose the Boss? The Manager or the Junior Trainee Hottie
Description
a leather and lace advice reader is confused about her relationship with a junior member of the staff who is flirting with her but sending mixed signals
Alison Blackman, advicesisters.com
alison blackman and anthony sabatini