I am a single mom of 2 young children under the age of 6. I’m in my late 30’s.  My boyfriend is a single dad with 2 kids close to the ages of my kids.  He is 37.   We live 3 hours away but are eventually looking towards getting married and blending our families.  My problem is that my boyfriend doesn’t get along with my parents. He thinks they’re judgemental and not welcoming him into the family.  He also thinks my parents are unsupportive and controlling.  We’ve been fighting over this because at this point, my parents feel the same way about him.   So now both my parents and my boyfriend make no effort at all.  This causes a lot of stress for me because  I love all of them!  I can’t choose between them.   Instead, I put off getting engaged at this point because I really need my parents and my boyfriend to get along before I commit.  This is vitally important.   I expect my parents to make an effort and I expect my boyfriend to respect my parents and for my sake do his best to have a good relationship with them. I think my boyfriend is being too sensitive and I also think my parents are afraid that my boyfriend will remove their support so I’ll have to rely on him emotionally and financially, Is it unrealistic for me to want these folks to get along for my sake?  (call me, Irene) 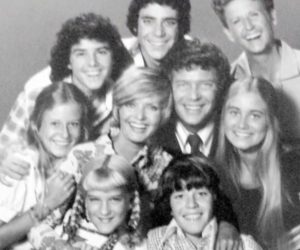 why can’t we blend like the Brady Bunch did and be happy parents?

This is an issue that I think many couples face in varying degrees.  Irene, I suggest you re-read your own letter to Leather and Lace Advice,  critically.  Really re-read it becuase immediately, one thing stands out for me.

Irene and her boyfriend are no longer just children who need to please their parents, they ARE parents.  While it’s always lovely to have parental approval, both you Irene and your boyfriend are Adults. You are parents, too.

That means doing what is best for your children.

One other thing stood out in your letter. You say that your parents are concerned about your boyfriend because they believe he is trying to control you and rely on him emotionally and financially (your exact words).  But isn’t that what partners who are living together, do?  It appears that your parents are trying to do the same thing!

Think carefully about who is controlling and leading you.

You picked your boyfriend because you want to be with him.  Your parents didn’t have a choice.

You can and should love everyone involved, but blending them together as “family” doesn’t always work. So if they refuse to suck it up and be civil, and if you are living with this man at some point or you marry him, you have your own family that should come first.

Grow up and do what you need to do.  If that means you’ll be seeing your parents less frequently they will see their grandchildren less frequently too.  Make sure they consider this as they are trying to come between you and your boyfriend.

You didn’t say how his parents feel about your relationship, but if yours are not in favor and his are ok with it, you’ll be spending a lot more holidays with his family than yours.

To add my thoughts we will take as a given that Irene’s boyfriend is overly sensitive to your parents. This oversensitivity is because he detects their latent hostility about losing control of their grandchildren and by placing those grandchildren 3 hours away, you have effectively cut the parents out of all but holiday visits with the grandchildren.

I see that Irene’s parents also may view the fact that once Irene and her boyfriend blend their families,  there will be two more children to whom the grandparents are not related at all but they will be expected to treat those children as equal to their own grandchildren.  This is especially true when it comes to things like giving them presents.

If it is a good relationship between this man and this woman that is the most important thing. Children need parents and finding someone to co-parent when you’re already in your late 30’s starts becoming desperately hard.

As Alison implied when we have children our needs and wants are subservient to ours. If this man is a good man and potentially a good husband, then one must cut him a little bit of slack and hope to work out the issues at a later time.