Help! His BRO mance is getting in the way of our ROmance 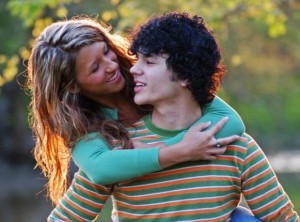 My boyfriend’s BROmance is getting in the way of our relationship. Why can’t he just be all MINE?!

His BroMance is getting in the way of our ROmance Alison and Tony and I feel like I’m a character in the movie, TED. Here’s my story:  Frank and I are both seniors in college. We plan to live together after we graduate this June, but Frank and his best friend and roommate Michael, seem to be inseparable. Michael always wants to hang with us. I don’t mind now and then, but it’s nearly all the time. For example, we were going camping last weekend, just the two of us. Michael heard about our plans and immediately said ‘hey I’ll come too!’ Michael has already suggested renting a group house for the Summer.  Frank won’t say no. I’ve told Frank that we are a couple and he needs to focus on us.  Michael says he understands, but I don’t think he gets it. In fact, I’m wondering if maybe there’s some gay thing going on.  I don’t dislike Michael, but he is just too close — way too often. Michael needs to get a life, and leave us alone! I didn’t want it to come to this, but at this point I’m ready to give Frank and ultimatum and say he has to choose between living with me, and his best friend. Do you agree?

Tony’s Take:  Sarina, This is one of the many reasons that I tell most young women that most men are not capable of a real relationship until someplace between 27 and 30 years of age.

These two are recreating the same clubhouse atmosphere that they had when they were 12. Your boyfriend’s main focus is on bonding with his “bro” as opposed to bonding with you, his girlfriend. You are the outsider and will never have his full attention and devotion until he grows up.

Yes, it’s a BROmance, but not a romantic one as Alison suggests, below. It’s just a sign a immaturity. if you move in with him you will give him pleasant interlude while he continues his behavior of BROmance, hanging hang out and having fun with his buddies. In addition, you will help to freeze his emotional state at that of a 15 year old.

If you really love him enough to move in, don’t, because it make it way too easy for him. As Alison suggests, suggest you continue to just date. Unlike the photo we’ve posted of two guys and a girlk playing a board game, life is not a game.  If you don’t correct this now, it will never get corrected and you will be the type of girlfriend who is alone while “the boys”  go out and play.

Note that happens with women, also. You need to be very careful because if you have an immature friend she will attempt to sabotage your relationship with a man because it takes the focus and attention off of her.

Alison’s Take:  In the best of all worlds, Frank would become a mature adult the minute he graduates from school, but as Tony as already said, that isn’t going to happen. Sarina, you are already savvy enough to know that’s not happening. You also know that moving in with him right now is a really bad idea. School’s out for Summer, school’s out forever, but the party with his pals will continue.

My advice, Sarina, is to let Frank enjoy his “boyhood” and not to give him the ultimatum at all.  No, it’s not about being gay. Frank is just a young guy having tons of fun at school and he doesn’t want that fun to end, just because he has a girlfriend. He wants his cake and wants to eat it too.  You are the romantic companion to the fun guy companion he already has with Michael. There’s no BROmance — he’s not romantically interested in Michael, he’s just not ready to push him away to be in a committed relationship with you and settle down.

Be the wise adult woman you already are, and tell him that you’ve thought it over, and it’s way too soon for the two of you to make this kind of commitment. Continue to date him if that’s what you want to do, but don’t live with him.  See if he “mans up” when you tell him that a main part of the reason is that he is not mature enough to commit to an adult relationship.

Sadly, the chance are that he won’t understand what you are saying (as he hasn’t in the past).  Then your choice is to ditch him and find someone more your emotional age, or continue to see him but start seeing other people too.  Start finding new activities outside of the relationship that neither Frank nor Michael are interested in. In other words, stop trying to pull Frank away from Michael, and go and have a life of your own. After school, move in with a girlfriend, or move back home, or find an apartment you can afford on your own, should you be lucky enough to snag a job that pays enough to do that.