I Spent My Birthday Alone & Starving, Because He Didn’t Show Up!

Should I Dump Him or Forgive Him?

Dear Leather and Lace Advice (Tony and Alison):  I’ve been with my boyfriend for over three years now. He’s funny, smart, romantic and fun to be with, but he is always late, and he almost never calls to tell me where he is or his ETA. I generally meet him near his house because if I didn’t, I would be waiting even longer for him to get to me.  Some days he doesn’t get moving until the afternoon.  But the one day I assumed he’d be motivated enough to be on time would be on my birthday. We had plans to meet for brunch near his house, but  I had dinner plans with my family as well, so I asked him to meet me at my house. He said ok, but then lunch time passed and hours went by. I called…twice. He said he was coming, but he didn’t show up until 4:30 pm. I hadn’t eaten anything and I was stuck at home alone, waiting for him. When he did arrive, it was without a card or gift, not even a flower.  His excuse? “I got side-tracked on a phone call.”  I was thunderstruck!  He couldn’t even make an effort on my birthday?!  I tried to keep my temper under control but I was furious. I told him if he ever did this to me again I would end our relationship, and I mean it. I didn’t need a big gesture, but his lack of consideration on my special day without doing a thing for me shows a total lack of respect for me and my feelings. He says he loves me but he’s not showing it.  As far as I know he isn’t trying to dump me (We are discussing moving in together) but  frankly, I’m wondering if I should dump him. What do the two of you think? 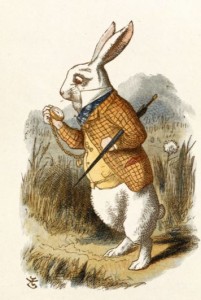 There is no excuse for anyone to be like the White Rabbit in Alice in Wonderland, especially on your birthday!

Tony’s Take:  Special holidays like birthdays are extremely stressful to both members of the relationship. As the boyfriend/girlfriend of the birthday person you are expected to do something big and special to celebrate the day.  Under such circumstances, even simple schedule changes can wreak havoc to what was planned, and leave the person who is supposed to be organizing the celebration not only in a total quandary but also feeling guilty in not having prepared an alternate plan.  So we sometimes can cut the person who tries, a little bit of slack, but in this case, is hard to justify.

We honor the people we care about by celebrating their birthdays. When we fail to honor them, or are needlessly late, or fail to call, it is a sign of disrespect and denial of that person.

I grant you as the birthday girl you have every right to expect a present, a card, and consideration from your significant other, and not getting them is going to leave you frustrated, hurt and disappointed. You must inspect the reasons why he didn’t have a gift or card. Was it money? A lack of opportunity to get them? Or something else?  Had he been attentive and giving you gifts before your birthday or was there an event planned for after your birthday which would qualify as a gift?  If so, although he may be thoughtless on a personal level, but he is not thoughtless overall and thus deserving of some consideration.

You are correct in assessing being chronically late as being an avoidance issue. But I would not go so far as saying it is intentionally contemptuous.

Alison Blackman:  Dump him or forgive him? That’s a radical choice to make.  I am one of those who feels that birthdays are sacred and celebrating them are can’t-miss rituals. Other people’s attitudes differ. Some think “it’s no big deal and let’s forget entirely” to “we can celebrate another day when it’s more convenient.” To me, not honoring the actual date is the same as not honoring it at all.  If that’s true for you, your boyfriend probably already knows after three years how important it is to you, and should have made a big effort to acknowledge you and celebrate at the appointed time.

A long phone call might be unavoidable at his job, but the way your boyfriend handled you, was inexcusable any day of the year.  This is especially true for a birthday. The only excuses for not showing up on time are death and alien abduction.

At the very least, you were owed a “heads up I’m so sorry but I’m going to be very late”  message. Your boyfriend could have, and should have done this when he realized he wasn’t going to get away on time.  This tells you that your important to him, and that he respects you, your time, and your needs. Better still, he should have made every effort to get to you as quickly as possible– I can’t believe that his phone call lasted for hours. Even if it did, or he was side-tracked by other unavoidable matters,  he should have texted you with an estimated time of arrival so you wouldn’t be waiting for him all alone, miserable and starving, wondering why he cared so little he couldn’t bother to let you know the situation.   At least that way, you could have made other birthday plans instead of sitting by yourself all alone, or maybe, you could have used your time productively to start looking for another boyfriend!