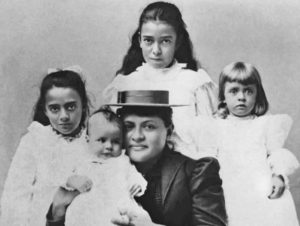 I used to be single and free and now I’m the stepmom to four kids!

I’ve been living with my fiance for a couple of years but we still haven’t set a wedding date. My issue is that he buys me inexpensive little things for my birthday, Christmas, Valentines Day but nothing like the $$$ he spent on his ex-wife. For her, there was jewelry, clothes, new cars every couple of years, and lots of luxurious trips.  It’s not that I don’t appreciate these gifts, but my fiance makes good money. I’m also a stay at home stepmom to his (and his ex-wife’s) kids. As such, I don’t have my own income to buy nice things for myself.  He let her spend money like it was going out of style and never complained so why should I pay the price for that? Not fair, don’t you agree?

It is easy enough to understand why he spent so much on his wife. He was buying her affection.

She found the words to make him feel like he was a failure in the relationship and he responded by giving her exactly what she wanted. It is obvious that he felt that she was more attractive and popular than he was.

It is easy to see why they are divorced. Either he ran out of money or realized that he had a whole bunch of college tuition he had to spend.

At the current rate, he would never make it with the spendthrift wife he had.

With respect to the writer, she is frankly being used. Two years is long enough to say put up or shut up. This man is with her because it’s easy. She takes care of all of those things that he is ill prepared to handle.

Like a bad food restaurant job, she has no health care benefits, no pension and profit sharing and no guarantee of future employment.

If a woman is going to give up her chance to have her own family then the man she is with had better reward her for it, because it is a great sacrifice and that is not what he’s doing.

His level of appreciation is hardly better than that of a nanny in the same situation. But of course, our writer is not getting any salary from her hard work.

It’s impossible to assess the depth of feelings through a letter, but I would advise the writer to be honest about her feelings and decide whether or not there is an actual future there.

Perhaps she is just wasting the best years of her life raising someone else’s children for no pay.

Money is power. I’m sure you’ve heard that expression before. Once you agreed to become a full-time stepmom, not even to your own children, you gave up all your power to a man who doesn’t see your intrinsic worth more than as a nanny and a maid.

While I admire your willingness to help out your fiance and his children, why would you ever agree to give up your own income and power without the benefit of a ring on your finger. As it stands, you have no security.

Consider that his children might also suffer if you two don’t tie the knot and the marriage never take place.

At least if you were his legal wife (which you should insist upon right now) you have some ability to tap into his income, should he tire of you as he did with his ex-wife or if something happens to him.

You say that your finance has a good job and he’s not spending much on you.  He should be paying for a maid and a nanny.

If you continue doing both jobs “for free” you are being taken advantage of.

However, your issue is less about the qualifty of the gifts he gives you than about how much you gave up while getting nothing in return.

Get a ring on it and do it now or find another relationship where you’re not devalued.