Q&A: we spend too much time with my fiance’s parents, and he won’t break free

My fiancé and I have been engaged for a few years. We’ve been living together since then to save for our wedding. This has brought up an issue that could tear us apart.  When we first met I liked how close Bob was to his parents, but as the years have passed, I have realized that Bob is so closely tied to them that he may not be able to break free and be a family with me. Bob calls his mom every night, and if he doesn’t, she calls him. We are expected to visit them at least every other weekend so we can’t make so many plans with our own friends and my parents. Every now and then we end up somewhere else and Bob’s folks give him grief  for that, so we have to make it up with dinner another day.  Bob hangs out with his Dad, and he even has a laptop and other personal items at his parents house like he hasn’t made a commitment to living with me. My own parents are a lot more laid back about visiting, but my own mom brought up this situation with Bob’s parents and suggested that maybe Bob can’t fully commit to a wife. I hate to admit it, but I’m beginning to think my mom may be right. I need to settle this before our wedding date arrives next Fall, but I don’t want to hurt Bob’s feelings. I would greatly appreciate your help as to how to handle this? 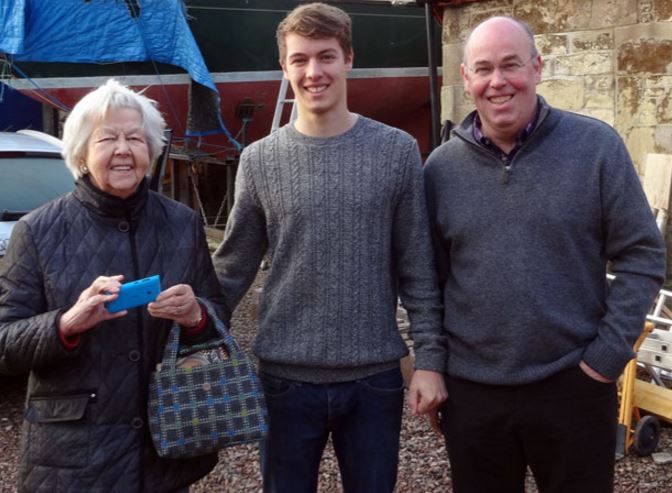 sorry honey, but there’s just no room for you in this picture!

Tony’s Take:  Jessica:  although not in the letter to us it seems obvious that Bob is effectively an only child. His mother has developed no outside interests in her life,  and is trying to live through her son, depending upon him for her own entertainment.  Sadly, Bob’s  father has also bought into the same relationship. Being dissatisfied with the world, he shares the easy camaraderie with his son as opposed to developing a more varied social life. Bob, in turn, has never felt the necessity to establish an identity beyond his being their son. All of this is not good because it is very mentally incestuous. His mother and his father are both trying to live through him as opposed to creating a life with each other which includes him. Sadly, as his parents grow older and more dependent, they will demand more and more of his time up until the point where he breaks, mentally.

Although Jessica sees a little bit of separation when she and Bob do something outside of the family compound, the separation is glacial in that it will take him over a decade or more to separate from his parents, if at all.  Jessica must realize that if Bob didn’t need physical companionship he wouldn’t need a girlfriend at all and Jessica’s role in life is going to end up being subservient to his parents (a reason why Japanese women prefer the younger son as opposed to the older son so that they don’t have to deal with the in-laws).

Alison’s Take:  Jessica, what you have in your future is the proverbial Mother-In-Law from Hell.  Don’t count on any support from your prospective father-in-law either, as he will go long with anything “Mommy Dearest” wants.

Bob’s mother knows that it would be inappropriate for her son to stay locked up completely in her clutches.  In fact, he has managed to break free far enough to have a semblance of his own life, find friends, even a fiance.  However, she needs him more than you do.  She will never let him go.  She may not have him completely to herself, but you won’t have him, either.

By going along with those weekend dinners for years now, you have tacitly given your approval to them.  In fact, it may be one of the reasons Bob and his parents have put the seal of approval on your engagement.  They want Bob to “stay in the fold,” and he wouldn’t be able to do that with a woman who refused to go along with the pattern you’ve already established — one that you know want to break.  Neither Bob nor his parents will understand why you wouldn’t want to continue these “fun” afternoons and evenings and, in fact, when you push back against them, they’ll all take it as a sign that you no longer like them or want to be around them.

I am not one to categorize people I haven’t met, but from your letter (which we’ve edited completely for privacy), it appears that Bob is not just a momma’s boy, but he has parents who wouldn’t have it any other way.  You are free to marry this man, as long as you play second fiddle and hang out with the folks, but I doubt Bob’s affection or loyalty will ever be first with you.