Hi Alison and Tony:  I’m writing about my boyfriend Bill. We have been together since high school and now we’re both 25 and the parents of twin girls. When we first started dating years ago he always brought me thoughtful little gifts to show he appreciated me. Now, it’s like he doesn’t even care.  He never gives me anything and I feel taken for granted, Worse, I didn’t mind being single before the twins were born, but now that we have the girls  I really want to make our union a legal one, mostly for the girls.  Although it seems that a lot of couples have babies together and don’t get married, I’m not one of those people. I am willing to go to City Hall, I don’t need a fancy wedding. I’ve told him this since our funds are tight, but still he wont’ propose.  How do I handle the situation?  Am I doing something wrong so he ignores me? What can I do to make this better?
Call me “Sad Sharon” 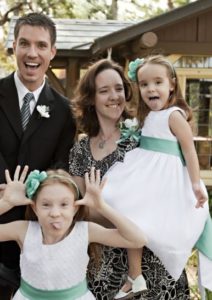 This is how I envision our wedding day…but .will it ever happen?

You and your boyfriend are still young. Your boyfriend may still not quite realize that he is not a boy anymore. He’s a man, a dad with twins.

My second thought is that you have been together 11 years so he may just feel that getting married is not necessary.

Assuming that these beautiful girls were not a surprise to you, then you agreed to have his babies without the benefit of marriage.

Your boyfriend (ok, Baby Daddy in today’s terms)  may wonder “what’s the rush?” after all, you didn’t complain about not having a wedding  for years,

Marriage is a big step and adulting is a big step, especially for immature guys. And as we know, boys mature more slowly than girls do (Tony mentions this, often).

While it is true that your boyfriend needs to grow up and man up, he’s probably not going to do this any time soon voluntarily. His lack of respect for you is probably due to a number of issues.

If you scratch the surface, you’ll probably find that he is under a lot of stress and is afraid of what is going to happen with the two of you in the future. A wedding might seem like a remove possibility to him.

You also say that funds are tight and weddings, even the simplest of them, aren’t cheap.  Maybe he is the one who dreams of a big wedding  (you never know).

You two really need to talk about your wants and needs. The longer you wait to settle the marriage, family and lack of respect issues, the more of a doormat you’ll become.

Or…Put A Ring on It:

There is a story in my family that my grandmother was seeing a man and assumed they’d be getting married, but my grandfather was slow to commit. At one point she felt she had waited long enough. She said: “I’ve rented the hall, we’re getting married next week!”  He agreed and they were married over 50 years.

I am not sure this would work on everyone, but you could try and do the reverse proposal. Tell him that now you’re parents and if he loves you and his girls, it’s time to make your relationship legal and give your kids a mom and dad with equal status. Add a ring, if you think that would not scare him away.

I can’t speak to why you want to stay with him, but love is often, blind.

So here’s the bottom line: Either he “puts a ring on it” or you will be a single mom raising his kids without him.

Your basic problem here is that your boyfriend is punishing you because you aren’t fun anymore. You’ve become a mom and a responsibility.

Most 25-year-old guys wanna hang out with friends drink beer and or party.  He resents the fact that you have “tied him down” even though by definition this was at least 50% his fault.

As we have seen previously in our letters, the male brain is not finished maturing biologically until age 30.

Until that point the drives to adventure and to conquer as many women as possible are dominant (for a woman her brain is finished growing at age 27). A wedding comes much later.

Your Life? Your Kids?

Once you become a parent you have given up having a life about yourself. Your 1st priority must be your children. That is who you have to look out for in this situation. What is going to be best for their lives?

What type of relationship are you going to present to your girls as good and healthy as husband and wife or even lovers?

Also, although your letter doesn’t state it, who is providing the income to raise your daughters?

I don’t suggest that you stay with this man lured by income, but be aware that you will need to substitute if he is no longer in your life.

The important things you have not told us are whether you still love him and still desire him. If you do, then show him that you care for him and want him both as a person and a sexual partner. The wedding, hopefully, will follow.

This will go a long way toward removing the separation that seems to have grown up between you.