Dear Leather and Lace Advice:  I think my boyfriend is a moocher.  He and I have been together for eleven months. We are both in our late twenties.  “Paul” says he loves me, but I’m worried that his actions say otherwise. We had been living together, but now he says he thinks maybe he should move back home to his parents house.  We used to be part of a bowling league and we went out at least once a week, but now he is never in the mood to go anywhere and we we asked to quit the league because we never were “no shows” so many times. I don’t know how to drive so I can’t just go off by myself, so I’m stuck at home watching Paul play video games on my xBox or do stuff on his computer. He won’t find a job, and I’m working part time (I’m looking for a full time job). He takes me to work in his car, so I give him gas money that eats into the little bit I make. But then he complains if I spend any of my own money on anything else. And worse, he nags me about my weight and always tried to control what I eat. If I eat something that he thinks I shouldn’t be eating he will tell me that I don’t need to be eating it and I shouldn’t have it.  Paul is a nice guy and in general he is kind and loving, but I think he is also controlling, and I don’t see our future going very well if this continues.  I don’t want to end my relationship with Paul but I’m wondering –could he just be a moocher who really doesn’t love me? 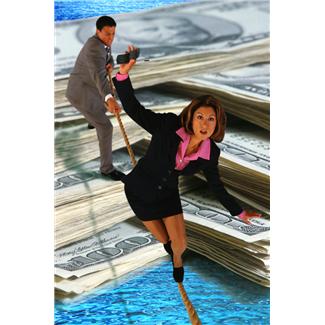 pulling all the strings and walking a fine line between love and money?

Alison’s Take:  You are wise, Diane, when you realize that actions speak louder than words.  It is easy to say: “I love you” and a lot harder to do the things that prove that is really true.   Let’s look at the situation and see how it stacks up.

I don’t know what Paul’s skills and work history are, but if he’s not working, that can lead to depression and a lack of interest in a lot of things. You didn’t mention if the two of you are still intimate, but assuming he’s still interested in sex, at least he can offer you that level of contact and intimacy.  Assuming he’s not even interested in sex,  it might not be you that’s he’s not loving, it is more likely him that he’s loathing.  In fact. that could be serious depression.  If that’s the case, the fact that he sits around playing video games doesn’t surprise me.  It might not be that he won’t find a job, but that he simply has lost the motivation to try.

If Paul doesn’t work and doesn’t have any money, he has little option but to live off your largess.  That might be making him feel uncomfortable, and that might be while he feels he should live at home. That might give him the incentive he needs to get back on his feet and get a job.  But while he is staying with you and living off your very limited income, I can see why he might also be worried about how your money is spent. If you are a couple and the only income you have is what you make in your part time job, it is your responsibility to be careful about how you spend it.   But it is still your responsibility.

As to nagging you about your weight, that is a different issue. Weight is one of  those emotionally charged issues that men don’t often handle very well.  Paul might feel that he is being caring and showing that he wants the best for you when he points out that something is fattening or that you are over-eating. In my opinion, it’s over-stepping for him to reprimand you as if you were a child. Worse, it is a foolish man indeed who tells his beloved that she is fat, or overweight. It doesn’t matter if that’s the truth.  It’s just not something any man should admit. That proverbial question: “Do I look fat in this?” should always be answered with: “You look beautiful.”

So is Paul a moocher or is he simply a nice guy who is in a bad situation?  Only you can really determine that.  But you need more information to do that, and it has to come from your boyfriend. Communication and trust are key to every relationship and you need to find out what’s on Paul’s mind and he needs to know what’s worrying you too. So sit Paul down and tell him what is bothering you about your relationship and hopefully he will feel safe enough in your relationship to share with you as well. You communicated clearly to us, now communicate with him.  If he truly loves you, the two of you will find ways to work out the issues, and move forward together. If he’s a true get-over/moocher/toad, the truth will quickly be revealed.

Paul has grown tired of you.  He was amused and entertained by you at the beginning but the lack of any real commonality of interests or affection has led to your current, bland existence. He wants to control your weight because he can see a pretty young woman in you which he could use as a trophy, but that is not the basis of a good relationship. The control about money is that he wants to have hire class more expensive experiences and cannot afford them himself.

Is he a moocher? He certainly fits the definition since you feed him, provide him shelter, and pay for his transportation. He will not readily leave you but he does not really love you. You are a convenient  sex partner and source of income.

*Tony’s comment on Alison:  although I agree with Alison in all particulars, it is unusual for the pressure to start in the middle of a relationship absent some external trigger which was not communicated in the letter,which is why my answer took the tone that it did.  Obviously, in light of the depression problem, Diane must seriously look on Paul as a person and decide whether he is depressed or just dissatisfied which would then make my take more reasonable.I chose to view his comment about moving back home as a threat to her that she could lose him.

Alison’s comment on Tony:  One of the great things about the exclusive “Double-Take” that Tony and I create for Leather and Lace Spice and Leather and Lace Advice is that we really do think different, as men and women often do. We do not see each other’s responses before we are ready to publish them.  I hate to think about the fact that a man might use a woman in the way Tony is suggesting Paul might be using Diane, but given the overall facts, I still think the evidence points more to depression than manipulation, and I wish our reader well in her relationship.