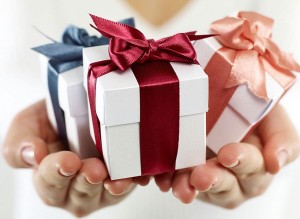 here are some tangible tokens of my love!

My boyfriend (call him “Frank”) have been in a relationship for four years He is a nice guy who treats me well. My issue is that he never buy me anything — not for birthdays, holidays or our anniversary or for any other reason.  I am not greedy, but I feel that after four years he should have given me some tokens of his love, no matter how small or inexpensive. I have given him gifts and he has always liked them and used/worn them. So why wouldn’t he reciprocate?  I have directly told him more than once how happy  would be if he’d give me a little something now and then, but he has never responded to my wishes.  Should I be worried ?

Tony’s Take: One of the big indicators in any relationship is how much a person thinks about the other person, and this is most often expressed as little or thoughtful gifts showing how the person understands you, and thinks about you. Big gifts (birthdays, holidays, etc) are a celebration of you, showing that the person you are with honors and cherishes you. Even a person who gives bad or cheap gifts is still giving you gifts which is a form of attention which is also a form of honoring you even if said gifts are below par.

Although you didn’t state I assume that you have been giving him some gifts within your ability to do so, which means he is actively ignoring the situation. Any thinking or feeling human being would get the point.

Should you be worried? Yes, definitely! There is a huge difference between a bad gift, a cheap gift, and no gift at all. is clear. No gift indicates that he is not thinking about you. You are not a person, you are merely someone he takes when he wants to go out and do something that requires a companion. He feeds you because he likes eating good food. He treats you well when you are with him because he likes things to be happy. He has made no mental commitment to you as a person. You are merely there as a convenience to his life. Four years is two years beyond the commit or get out stage so at this point in time he takes you for granted and gives you minimal amount of himself in forms that are convenient and pleasing to himself. If I were in this situation I would leave.

Alison’s Take:  Anita, if it makes you feel any better, we receive many letters like yours with varying issues. But the core of the problem remains the same for everyone: gifts are a show of esteem, love, affection and sometimes, obligation. When someone cares about you, normally they celebrate your life’s moments or sometimes just want to show you a tangible token of their affection. Whether it is the proverbial gold watch at retirement, or a bar mitzvah gift, or something more personal such as a birthday gift for your special someone (or any time just to delight them), gifts help mark those occasions.

There are a lot of people (both men and women) who either didn’t grow up in a home where gifts were given, or they are stingy, or they are afraid to give the wrong thing so they give nothing at all. But society and tradition still push some of these people to give gifts when appropriate.  I would assume the your boyfriend already knows (you told him directly) that you would like him to celebrate you with an occasional token of his love, which you could treasure. That he refuses to do it while accepting your gifts, makes me think that either he comes from group A (the ones who never received or gave gifts as a child), or to be kind, he might be the type of man who just doesn’t know what to give you, so he doesn’t do it. If you have spent four years together, you probably know if he has given gifts to other people (e.g. gifts at holidays, mother’s day, weddings, etc.) . If he does gift others and not you, that is a huge red flag. However if he doesn’t give any gifts to anyone, that is how he is.

What worries me more is that he isn’t trying to meet your needs. You have told him many times how much you’d like him to give you something and yet he still ignores you!  Most men are task oriented and they will usually try to please the woman they love (if it’s not insanely difficult). That your boyfriend won’t do this even with a direct request that couldn’t be mis-interpreted tells me volumes about him. Even giving him a lot of slack,  I grudgingly agree with Tony that you should be worried and take his lack of consideration for your needs, seriously.

If you want to give this one more try, take a walk past some of your favorite places to shop, drag him inside, point to something you like (an inexpensive book..tchocke…etc.) and ask him directly to buy it for you. It’s just a little token of love and he can understand immediately what it is he is being asked to do.  If he recoils in horror or refuses to respond, I would really think twice about the relationship.  You could also say: “ You know Frank, you haven’t ever given me a gift and we’ve been together for four years. Would you buy this for me? ”  Taking a less aggressive approach, simply walk him up to the window of a store and say “I’d really like to have this, would you buy it for me for my birthday (or whatever holiday is coming up). If he balks at either request or ignores it, he is not stingy or clueless, he doesn’t care enough to please you. RUN!