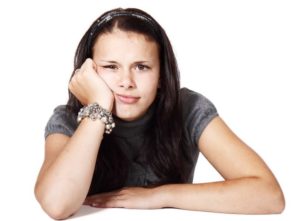 My husband never follows through on the things he says he’s going to do. This has been a constant throughout our marriage. I can give you dozens of examples large and small, on nearly a daily basis. For example, the other day we were going to visit some relatives. I asked “Tom” to fill the gas tank the day before the trip so we could get an early start. He said “sure.” That morning I noticed he hadn’t filled the tank. We wasted at least 20 minutes getting gas, so we arrived late. Another time we were having a barbecue and had purchased a picnic table that had to be assembled. I asked Tom to do this a few weeks before the party. He said “sure.” Two weeks before the party I noticed he hadn’t done it, so I reminded him that we needed it for the party. He got mad at me and said he’d get it done, not to nag him. Of course. the night before the party, he still hadn’t done it. That morning, I had to stop what I needed to do to help him assemble the table.  I can do some of these things myself, but Tom takes it as a personal affront if I try to do so, saying he has it under control..but he doesn’t! Tom has forgotten to pay bills and other things that he insists on doing himself but that he simply doesn’t seem to do in any reasonable time frame or at all. I am getting really frustrated as I don’t like to see things fall apart in our lives simply because Tom wants to control but then never gets things done. Is there any way to either take control myself or motivate my husband to get things done, without ruining our relationship?

Anne, Teed Off in Texas

Tony’s Take: Sadly, this type of behavior is an indication of either contempt or rebellion. He likely feels put upon and therefore purposely delays “gratification” for you, his partner,  as a form of punishment. If you wish the relationship to survive long term, you need to find out why he feels abused, why he feels disconnected from you. This will not be the only indicator that things have cooled between you.

Good relationships are built on mutual caring and mutual respect, and when this breaks down , you get the kind of behavior pattern you are describing. You have to examine the situation and discover where you have pushed the limits too far,  such that he compensates with this rather petty behavior.

Understand that even though he’s being stubborn,  it doesn’t mean he doesn’t care for you or that he doesn’t love you. But it does mean that he feels trapped and emasculated by something in the relationship.

Rather than blow up the entire relationship and walking away, he lets off a bit of his discontent in these small ways.

Alison’s Take:  When I first read Tony’s response I did squirm. As a woman, I don’t see why men should need to be rewarded when women do chores every day without any recognition. But if you have a “Tom” in your life the pattern was established early in the relationship and in order to break the pattern, love, not tough love, is probably best.

If there’s one thing a man doesn’t like, it’s being nagged and pushed.  When a man says he will do something but then doesn’t follow through, it could mean that he means to do (sincerely), but men tend to get easily distracted. They are not always as good as women when it comes to multi-tasking chores. They prioritize differently.  For a man, getting something done at work or finishing the crossword puzzle before dinner is far more important than taking out the trash, putting gas in the car to visit relatives he probably doesn’t want to visit, in the first place.

It is also quite possible, as Tony suggested, that your husband says “sure” to shut you up and avoid a fight, but he never intends to do anything. It’s just a way to avoid an immediate argument and avoid stress. He wants to control the relationship and he’s made it a battleground. This is a fight you can’t win with “gentle reminders.”

You are making your husband the problem, but you are also part of it. Consider:  how many of the things are you asking your husband to do, does he actually do? The chances are that he does a lot of the chores you are asking him to handle. It is the ones he doesn’t do, that you remember, that irritate and anger you, and that compelled you to write to us.

If a man (or woman)wants to control but then doesn’t follow through, showing appreciation for what they do is a reward system. Nagging or showing your irritation just fuels their resolve to ignore you.  Maybe this is infantile behavior, but if you are in a relationship with something like this, you have two choices. You can leave, or you can find something that works, becuase killing someone with kindness is a lot better than showing how disappointed and disgusted you are with them.

It’s a good idea for you to think before you speak. Don’t assign little tasks that you can do and that you feel must be done quickly, if you can quietly get them done yourself, and avoid frustration.  There is a big difference between putting gas in the car (you could do this and he probably wouldn’t even notice) and a complicated project such as putting together that picnic table with power tools.  Try assigning less on your “honey do” list, and the chances are better that your husband will actually do the important chores that you really need him to do.

As to Tony’s suggestion that you have to “reward” a man for a job well done, I admit that I initially squirmed and was indignant. But again, I reconsidered (and so should you). In a perfect world you wouldn’t need to stroke your man’s ego,  but men are fragile in their own way.  Showing your appreciation for a chore is always nice, even if your husband takes what you do for granted. He shouldn’t, but women are used to being multi-taskers that handle mundane, thankless jobs,  without recognition.

We should get recognized more for what we do (and you can certainly point that out to your husband) but most women don’t need to be “stroked” quite as much. If rewarding your husband for doing those tasks gets his motor running and motivates him to do more of what you want and need him to do, at least he will be happy and you will be too because this issue will fade in significance in your lives and you’ll both be under less stress.

What do you think of Alison and Tony’s advice to “Anne, Teed off in Texas?”  OW WOULD YOU HANDLE THIS ISSUE?     Does your partner procrastinate when it comes to chores? We’d love to hear from you. Share your thoughts in our comment section. Also feel free to share this Q&A with your social media contacts and link to it (or ask us if you would like to have our exclusive content for your website–just remember it’s copyrighted, you must ask written permission ).

If this reader question isn’t relevant to you, it might be for someone you know. Is there another issue is bothering Do you have an issue with a friend, love, or spouse that is driving you crazy, but you can’t get it under control and you don’t want to tell close friends?  Let Alison and Tony of Leather and Lace Advice (and our sister site, Leather and Lace Spice) be your virtual best friends and get you “unstuck.”  We can’t read your mind, but we can read your email.  Be assured (as with the reader question above) that we treat your privacy as we would wish ours to be treated–VERY CAREFULLY. (read our privacy policy). Details from reader questions are completely changed and only the core of the issue is the same. No one will know this question is from you.